A few weeks ago I received a message from Hop in the Box, thanking me for promoting them on Instagram and asking me if I wanted to receive a box? Absolutely! I have been seeing them a lot lately on social media and have been wanting to try their beers! Instead of having them send it, I asked if I could drop by and pick it up myself, so I could meet Pedro and Edison in person (curious as I am). And I’m so glad I did! They even made the time to have coffee and a chat. Eager, ambitious and full of inspiration, they have a compelling story. I made the bold move of inviting them to be my first interview for the blog. Fast-forward to October 19 in Proeflokaal Faas, where we spent a couple of hours talking about their business, their grand plans and of course trying out a few beers. It was such a fun and inspiring evening! Read on for the full behind-the-scenes story!

For the beer fans out there who haven’t heard of you yet, what is Hop in the Box?

Edison: We are an online business, but like to think of ourselves more as a ‘beer club’. Every month we choose three beers from an independent brewery and send them to our members. You can choose between two monthly subscriptions: a box of three or six cans. What makes the boxes special is that the beers are not available in Holland. So each month is like a new discovery. Our goal is to make awesome craft beers available to everyone.

Pedro: It’s a ‘meet the brewer in a box’ concept. We initially started with bottles, but have now switched to cans. The beers are just as good and it’s easier to package. In cans we trust! How are we different from other online beer subscriptions? Apart from the fact that the beers we select every month are being introduced for the first time in the Netherlands, we also have 7+ years experience in the craft beer industry. The network we have built over the years is very important for us.

Who is your target group?

Edison: All beers lovers who are willing to experiment and try new things. Every month is a surprise what you are going to get! We do try to find beers that will suit everyone, but beer is very much about personal preference. We hope that people will keep an open mind and are willing to try everything.

Pedro: Our beers are for people with a young spirit and a young soul. By choosing smaller craft beer breweries and introducing them here, we try to give those brewers and the craft beer revolution a boost!

I’m very curious, as I’m sure everyone is, how did two Brazilian guys end up in Rotterdam?

Pedro: I started a beer club in Brazil in 2010 together with a friend. It grew to 15.000 members, the biggest one in Latin America. In 2014 we sold it to a wine retailer. Why sell? To be honest it was a great deal. But we also had many new ideas and were eager to start new projects, so this gave us the perfect opportunity. I wanted to come to Europe, but didn’t know which country. My wife was accepted as a student in a study program at the Erasmus University in Rotterdam, so that sealed the deal for us. And we have no regrets, we love it here. Then last year I asked Edison to join me.

Edison: We have been friends since we were kids. I was working in a logistics job, but was a bit tired of the corporate life. Pedro’s proposition was too good to pass up. Of course I discussed it with the family first, but we found a way to make it work. So I quit my job and moved to Rotterdam with my wife and son in June 2017.

Pedro: We have a third partner, Rafael, who is still in Brazil. He was also my partner in the previous beer club. We are working on getting him to Rotterdam as well. We manage all of our projects between the three of us. I have the contacts with the breweries and do most of the networking. I also come up with a lot of the ideas and concepts. Edison has the operational expertise. His background is perfect for organizing all of our logistics. Rafael is our ‘products’ guy. He comes up with the recipes and ideas for which beers to brew. He talks with our head brewer in San Diego and has the contacts with our art director (who creates the booklet that you get in your box each month!).

You mentioned your head brewer. What else have you got going on besides the beer club?

Pedro: Our main company Hops Inside is a a start-up lab focused on the craft beer industry. Through this company we create, develop and manage initiatives that complement each other. One of those projects is our own brewery 4 Islands Brewing. The slogan is “Flip flops first, questions later”. You can probably imagine what inspired that! We named it after a beach in Bombinhas in the south of Brazil, where we go on holidays with friends every year and have had great moments over the last decades, always with plenty of beer of course! The brewery that we contracted to produce our beers is located in San Diego, California. In fact, we are flying there in a few days to launch our new beers at the Huntington festival in California the last weekend of October! The festival is organized by Fat Mike, lead singer of NOFX, one of my favorite bands.

We have a lot of other ideas, like opening our own taproom here in Rotterdam if we can find the right location. A similar approach to the Mikkeller concept, who is also a gypsy brewer. And we are planning on brewing beers in Europe, with a brewer from Germany.

Edison: We want to be much more than an online business. We also want to be active ‘offline’. For us it’s about the interaction with people, the celebration of craft beer, having fun with it!

Pedro: We are what we like to call “beerpreneurs”. We prefer the offline connection, having conversations with people who are excited about craft beer. We love visiting beer bars and taking the opportunity to talk with the bartender. We have a good relationship now with Willem, the owner of Proeflokaal Faas. We get to put one of our beers on tap here every month for people to try. That’s what it’s about.

Where do you think the craft beer trend is headed in Holland?

Pedro: That’s a good question. I think the craft beer boom will grow exponentially. In Holland it’s not as booming as it is in other countries, like the US and Scandinavia. Maybe because the Dutch people, like the Belgians and the Germans, have a history of making and drinking great ‘speciaalbier’ and are a bit slower to jump on the bandwagon. But I’m convinced that craft beer is where it’s going. It’s about the hops. The US has known this for a while and are the instigators of the craft beer movement. We as beerpreneurs are riding the wave.

I’m sure running your own business comes with certain challenges. What was one of the biggest challenges so far?

Pedro: We found the Dutch market and Dutch culture to be quite challenging. We learned that price plays an important role in the choices of customers here. So we have adapted our business model accordingly.

And what about your biggest ‘fuck-up’? Everybody loves a good story!

Edison: Well, we’ve had several! One of them was trying to expand to Spain. That didn’t take off. Possibly a cultural thing, the craft beer boom is not a big thing there yet. So we pulled the plug. But we promised our beer club members that we would be back! Spain is still on our list.

Pedro: Another one was having our website and Instagram in Dutch. Not that there was anything wrong with that, but it meant paying a translator to create a website in a language we couldn’t understand. We decided it would make more sense to do it in English, so we cut out the middle man. Everyone here understands English anyway!

Any last thoughts before we head over to the bar for a new beer?

There are a lot of interesting things happening in beer right now. We invite everyone to join the club and have fun trying new beers! 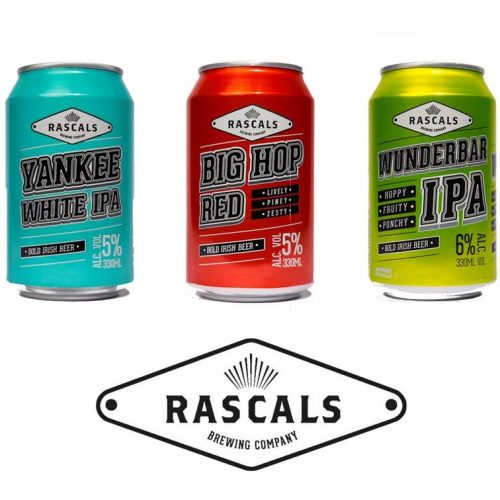 The November boxes are available now!

Find out more on hopinthebox.nl

Update December 2017: Unfortunately Pedro and Edison have decided to discontinue the monthly beer club. They are working hard on their own beer label and hope to bring 4 Islands beers to The Netherlands in 2018.

One Thought to “Behind the scenes with Hop in the Box”

#supportlocal Quarantine certainly does have its p

It's here! For all you @peakyblindersofficial fans

I was so excited to taste this very special collab