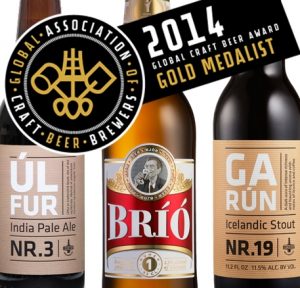 I loved my first taste of Icelandic beers at the BORG BRUGGHÚS tap takeover at Kaapse Brouwers on Friday December 8. I was impressed with the beers, they exceeded all expectations! Every beer had a lovely and surprising twist. If you want to know more about them, then read on!
•
Snorri Nr. 10 was a lovely one to start off with, made with Icelandic barley and Arctic thyme, a beer made in honor of Snorri Sturluson, chieftain at Borg, the manor the brewery is named after. The thyme is subtle, giving it a nice twist, but still super drinkable.
•
I was blown away by Sæmundur Nr. 49, a mango pale ale, and I really mean MANGO! I loved the tropical juicy flow and hoppy flavor. With Citra and Equinox hops and British yeast. Brewed in honor of the Icelandic biscuit baron Sæmundur.
•
I’m a big fan of coffee stouts (or breakfast beers as I like to call them) and the Surtur imperial stout Nr. 47 is pure coffee. Loved it! There is some chocolate in there as well. Dangerously drinkable at 10%. Named after Surtr (Old Norse for “black” or the “swarthy one”) a devil giant in Norse mythology foretold as being a major figure during the events of Ragnarök.
•
Judas Nr. 16.1 is a quadrupel with rock candy, aged six months in cognac casks. Definitely quite a boozy flavor with a sweet caramel twist. Good stuff, I recommend small glass and slow sipping :-).
•
The first taste of the Leifur Nr. 32 Nordic saison wasn’t super special, but the herbal flavors of Arctic thyme and heather, and the subtlety of crushed pepper, really came out as it warmed up. It is named after the Icelandic explorer Leifur Eiriksson, the first European to set foot in North America, almost 500 years before Christopher Columbus.
•
I think my favorite one was the sheep shit beer (!) Surtur imperial stout Nr. 30, made with malt that is sheep dung smoked (Iceland doesn’t have natural tree growth, so they have to burn other stuff to get smoke). The smokey aroma and flavor is subtle, the taste is dark coffee and chocolate, a lovely winter beer.

Save the date 📆! Every Wednesday night at 8pm C

Day 1 of @horalvzw's virtual Toer De Geuze! It was