Last month I got one of the best Christmas presents ever: I went for a weekend trip to Belgium to visit the Alvinne brewery and watch them brew. It was a special invitation for members of the Alvinne Fellowship. What an experience to see them doing their thing up close! I took some great shots of the brew day, so I thought I would share them with you, including the story of the Fellowship, their excellent beers and why this brewery has become one of my favorites in a relatively short time.

I think I became a fan shortly after my first or second Alvinne beer at Borefts beer festival. If you like sour or wild ales and have an adventurous spirit, Alvinne’s innovative beers will most likely appeal to you, too. It wasn’t only their quality sours however that got my attention. What drew me in was their passion for beer and sharing their story, and the easy way they connect with the beer community and beer fans. To me drinking beer is a very personal experience and the stories and the people behind it make a big difference in how I taste and appreciate it. If I have a more personal connection with a brewery, then I am even happier drinking their beer. Alvinne is one of the few Belgian breweries I know who has this effect. If you have ever met Glenn Castelein, then you know what I’m talking about.

Another reason they are so inspiring to me is what they put in their beers, and I’m not only referring to blood, sweat and tears. They have their own Morpheus yeast strain – a mixture of two Saccharanomyces yeasts and lactobacillus bacteria – that was harvested from the wild many years ago by their very own yeast whisperer Marc. They also specialize in barrel aging, which is a very important part of creating the complex flavors in their beers. The fruit they use is usually foraged or self-grown and only real fruit goes into their beers, so it’s all natural. To me that is craft at its finest.

I’ll tell you more about the Fellowship and how you can become a fellow below. But first, the Fellowship brew day! All the fellows were invited on the shortest day of the year December 21st to help brew Fellowship beer #8 Winter Solstice. The idea was to make a completely different brew than they usually do, this time involving a Christmas tree, a wooden barrel and hot stones for boiling the wort. First the mash was made (with mostly pale ale malt I believe) to which the Christmas tree branches were added. Meanwhile the stones were heating up in the fire along with some malt (for caramelisation effect). I’ve found that brewing is not only hard work, it is also a lot of waiting around! During the mash we tasted some of their delicious eisbock, made from Cuvée d’Erpigny – a real winter warmer. I was also especially impressed with the glühbeer, made from Sour’ire de Mortagne and glühwein spices. Hot beer is my new thing! At the same time honey and figs were being smoked to add to beer #7 Honey Cake. When the mash was done we got a smell (and taste!) of the fresh wort before it was brought to a boil in a barrel by adding the hot stones from the fire. I didn’t imagine it could get so hot, but with just a few stones it started to boil and overflow. Because the yeast was put in after it was cooled overnight, we didn’t get to witness the later stages, but it is not now happily fermenting in an oak barrel waiting to be bottled soon.

Another highlight of the day was Marc’s freshly made bread with Morpheus yeast we had for lunch. It reminded me of those amazing fresh French breads you buy on holiday. Very cool were the little mementos they had made with all our names on them. I love that they went out of their way to give the fellows such a special experience! The day ended with an excellent party and beer tasting in their taproom De Proefloft upstairs.

The Fellowship of Exceptional Ales

So what is the Fellowship? For some beers limited ingredients are available, such as the foraged Schaarbeekse Kriek, resulting in limited batches and unhappy customers when the bottles sell out within a few hours with most people not having the opportunity to get their hands on them. This led to the idea to make exclusive and limited batches (max 400l) available to the fans, hence The Fellowship was born! The concept is simple: to become a ‘fellow’ you pay a contribution of €100 and in return you will receive 3 litres of their exclusive beers. Every year the production will be different, depending on which batches provide the best results. For the year 2018/2019 9 different beers are to be released for the Fellowship (see below).

You can still sign up for this year’s Fellowship (beers to be released in February / March 2019). Find out more at www.alvinnesfellowship.be. 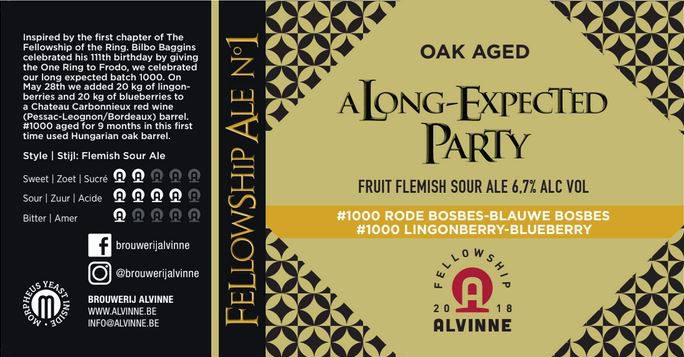 Inspired by the first chapter of The Fellowship of the Ring. Bilbo Baggins celebrated his 111th birthday by giving the One Ring to Frodo, we celebrated our long expected batch 1000. On May 28th we added 20 kg of lingonberries and 20 kg of blueberries to a 225 l Chateau Carbonnieux red wine (Pessac-Leognon/Bordeaux) barrel. #1000 aged for 9 months on this first time used Hungarian oak barrel. 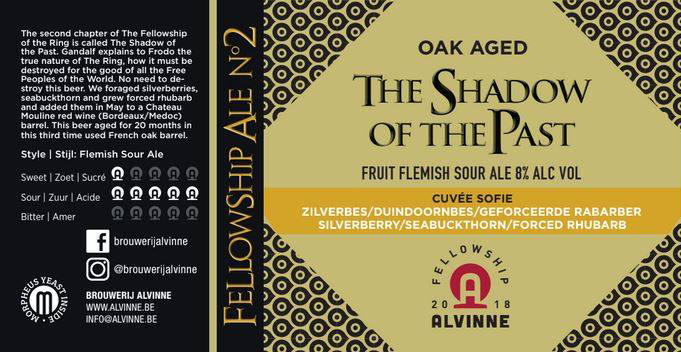 2. The Shadow of the Past

The second chapter of The Fellowship of the Ring is called The Shadow of the Past. Gandalf explains to Frodo the true nature of The Ring, how it must be destroyed for the good of all Free Peoples of the World. No need to destroy this beer. We foraged silverberries, sea buckthorn and grew forced rhubarb and added them in May to a Chateau Mouline red win (Bordeaux/Medoc) barrel. This beer aged for 20 month in this third used French oak barrel. 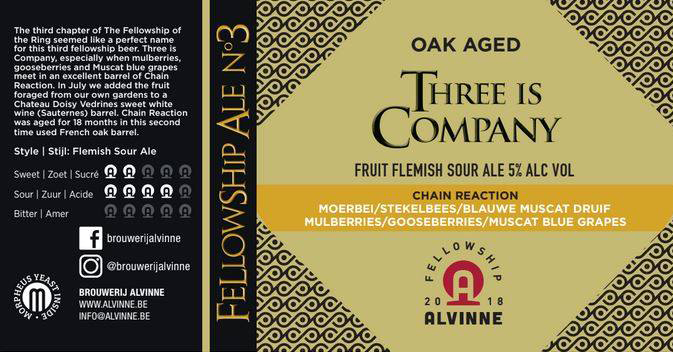 The third chapter of The Fellowship of the Ring seemed like a perfect name for this third fellowship beer. Three is Company, especially when mullberries, gooseberries and Muscat blue grapes meet in an excellent barrel of Chain Reaction. In July we added the fruit foraged from our own gardens to a Chateau Doisy Vedrines sweet white wine (Sauternes) barrel. Chain Reaction was aged for 18 months on this second time used French oak barrel. 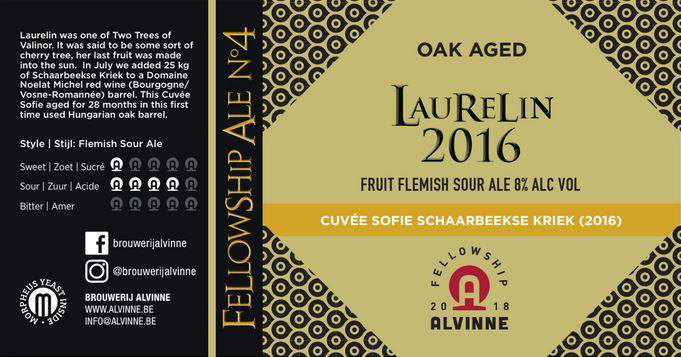 Laurelin was one of Two Trees of Valor. It was said to be some sort of cherry tree, her last fruit was made into the sun. In July we added 25 kg of Schaarbeekse Kriek to a 2016 Domaine Noelat Michel red wine (Bourgogne/ Vosne-Romannée) barrel. This Cuvée Sofie aged for 28 months on this first time used Hungarian oak barrel. 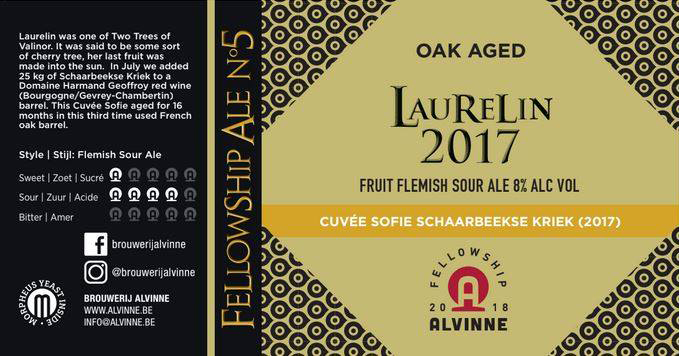 Laurelin was one of Two Trees of Valor. It was said to be some sort of cherry tree, her last fruit was made into the sun. In July we added 25 kg of Schaarbeekse Kriek to a 2017 Domaine Harmand Geoffroy red wine (Bourgogne/Gevrey-Chambertin) barrel. This Cuvée Sofie aged for 16 months on this third time used Hungarian oak barrel. 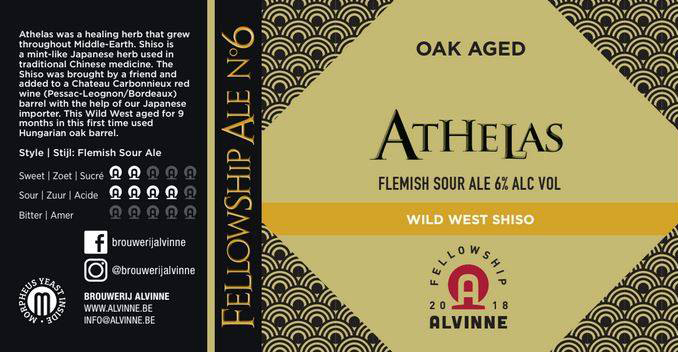 Athelas was a healing herb that grew throughout Middle Earth. Shiso is a mint-like Japanese herb used in traditional Chinese medicine. The Shiso was brought by a friend and added to a Chateau Carbonnieux red wine (Pessac-Leognon/Bordeaux) barrel with the help of our Japanese importer. This Wild West aged for 9 months in this first time used Hungarian oak barrel. 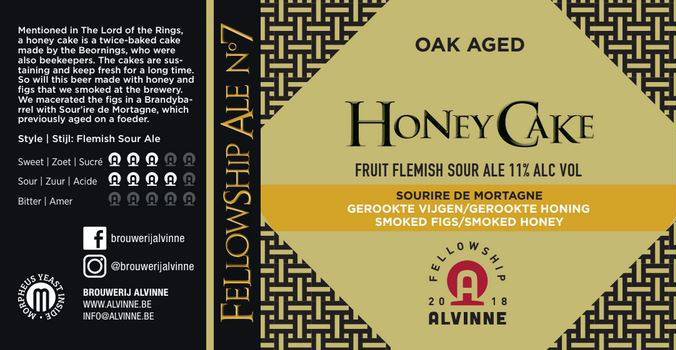 Mentioned in the Lord of the Rings, a honey cake is a twice-baked cake made by the Beornings , who were also beekeepers. The cakes are sustaining and keep fresh for a long time. So will this beer made with honey and figs that we smoked at the brewery. We macerated the figs in a Brandy barrel with Sour’ire de Montagne, which previously aged in a foeder. 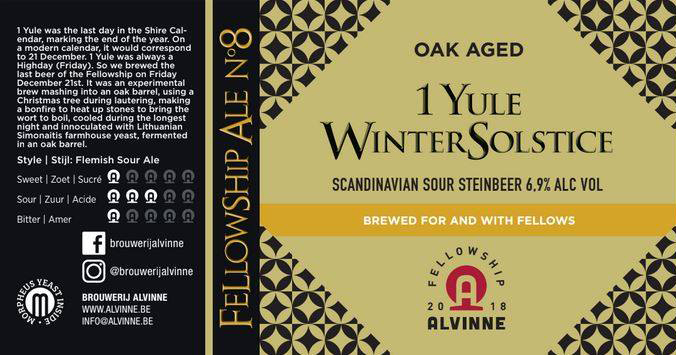 1 Yule was the last day in the Shire Calendar, marking the end of the year. On a modern calendar, it would correspond to December 21. 1 Yule was always a Highday (Friday). So we brewed the last beer of the Fellowship on Friday December 21, 2018. It was an experimental brew mashing into an oak barrel, using a Christmas tree during lautering, making a bonfire to heat the stones to bring the wort to boil, cooled during the longest night and inoculated with Lithuanian Simonaitis farmhouse yeast, fermented in an oak barrel. 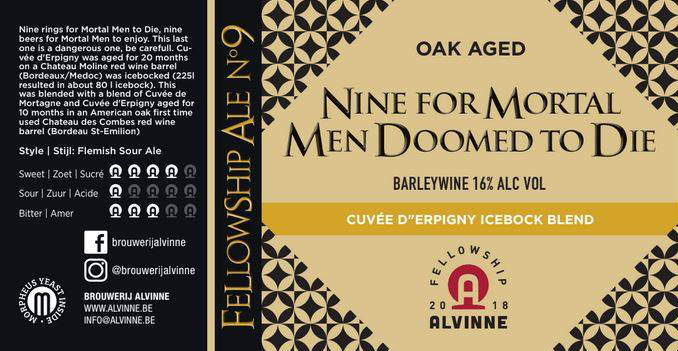 Nine rings for nine mortal men to die, nine beers for nine mortal men to enjoy. This last one is a dangerous one, be careful. Cuvée d’Erpigny was aged for 20 months on a Chateau Moline red wine barrel (Bordeaux/Medoc) and was icebocked. This was blended with a blend of Cuvée de Mortagne and Cuvée d’Erpigny aged for 10 months in an American oak first time used Chateau des Combes red wine barrel (Bordeaux St-Emilion).

The brewery was founded in 2004 by Glenn Castelein and Davy Spiessens. Marc De Keukeleire, also known as the yeast whisperer, joined the team in 2010. A year later they relocated to the current brewery location, where they have also created a small tasting room De Proefloft and a small bottleshop. New members of the team since last year are Fred Magnus and Loick Bekaert. Alvinne produces a core range of traditional and Flemish sour ales, and specializes in barrel aging. They have a collection of 5 foeders, including one mega foeder with a 75 hl capacity, which is the pride of the brewery and the foeder that features in their logo.

Address:
Vaartstraat 4a, Moen (BE)

One Thought to “Alvinne’s Fellowship of Exceptional Ales”

Eisbock baby! Staying warm with two of my favorite